My friend Charles Poth and I had been looking for just such a machine. We found the owner’s home outside rural  Jeromesville, Ohio, at the end of a long gravel road. The planer was stored outside under a raggedy canvas tarp. It was huge!

As usual, there was some shooting the breeze before getting down to business. The fellow had bought the planer at auction from a lumber mill near Bellville, Ohio, five years earlier, intent on purchasing enough equipment to open his own lumber mill. As new machinery came in the front door, the older equipment went out the back, into an open field. We counted three planers there, each progressively newer.  Miles of rusting line shafting also lay stacked about in forlorn piles.

The man had begun restoring the planer with optimism. He was surprised that it hadn’t been frozen up too badly, despite having been exposed to rain and snow for years. He re-turned the rusted and pitted feed rolls on a metal lathe, repoured all the Babbitt bearings, repaired the pressure bar, replaced some bolts, and did a serviceable clean up. His ambitious business plans didn’t work out so well, though, so he put everything up for sale.

The tractor arrangement wasn’t very convenient, so we moved the planer one more time, to my shop, where I planned on totally restoring it.

Charles is an expert on antique machinery, so he gave the planer a thorough examination. There was no structural damage, and no motor to test, because it had originally been powered by a wide leather belt connected to a line shaft. Unfortunately, the planer didn’t have a nameplate. Its manufacturer would remain a mystery for some time.

While we were studying the machine, two other men stopped by. They took one look at the planer, laughed derisively, immediately got back in their car and left. That probably explains how the sale price of $450 quickly became “or best offer.” Our $350 in cash clinched the deal.

We loaded the planer into Charles’ pick-up truck during a blinding snowstorm. A neighbor down the country lane kindly volunteered his small Bobcat tractor, but he had a difficult time maneuvering the one-ton dinosaur. Back home, we struggled through deep drifts, falling snow, and biting wind to get the smaller parts into Charles’ shop and under cover. A few days later, we hired a local towing service to get the rest of the beast off the truck and into his shop.

The gears and pulleys of vintage machines fascinate me. On this planer, the feed roller can be slowed down by a handhold connected to an idler pulley if the cut is too heavy.

A couple of years later, while going through some very old issues of The Manufacturer And Builder magazine, I discovered that the planer had been designed and patented by well-known inventor E. F. Gordon, and made by the John A. White Co. of Dover, New Hampshire, about 1876.  That made it a mere 113 years old.

Charles and I got the planer working OK, but we had to use his old Allis-Chalmers farm tractor to provide the power. This became rather inconvenient, to say the least. Anytime I wanted to plane a wide board I had to travel the mile or so to Charles’s shop and hope he was free to move the tractor into position and belt everything up. I resolved to move the beast yet again.

One obstacle stood in the way: Charles had installed another massive machine between the planer and the door. This was a 1917 43×8-inch P. B. Yates No. 401 three-drum sander, weighing almost 8,000 pounds. It wasn’t going anywhere soon. Charles calmly said that we’d just remove the wall behind the planer and pull it out that way.

Tear out a wall! Turns out that the wood frame building once belonged to the township. For efficiency, they had built it with an entrance on both ends so road equipment could enter at one end and go out the other. Charles had sealed off the other end long ago. In less than an hour four of us took down the wall. We used pry bars to rotate the planer 90 degrees so a rollback truck operator could winch it through the opening.

It only hung up once, but a strong push with a 4×4 freed it again. It was weird seeing the planer traveling down the road chained atop the truck bed, instead of a car. Unloading it was anticlimactic.

With the planer now in my own shop, I decided to restore it as completely as skills and funds permitted.

I added a new 5 hp, 220 v., three-phase motor. After brushing on a new coat of white paint one day, matching the original color, I stepped back to admire my handiwork. “Moby Dick,” I said. “That’s its real name!” I’d been chasing this leviathan for years, but unlike old Ahab, I landed the white whale. 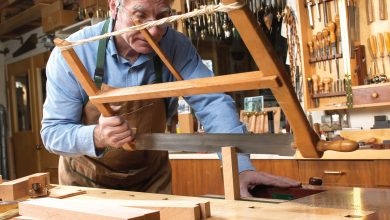 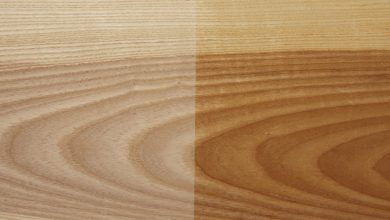 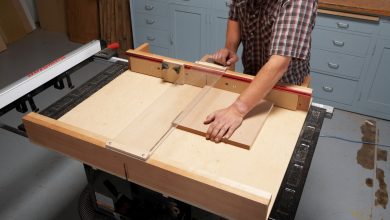